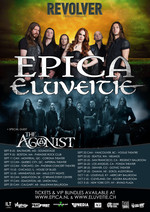 2015-05-26 - This fall, Dutch symphonic metal titans EPICA and Swiss folk metallers ELUVEITIE will join forces to co-headline across North America. This trek, sponsored by Revolver Magazine, also has Canada’s THE AGONIST supporting on all dates. Please see below for all tourdates and VIP ticketing information.

EPICA front-woman Simone Simons says the following about the upcoming tour: “We are ecstatic to finally return to North America. It is time to nurture our long-distance relationship with our fans over in North America. We'll have a wonderful time together and will perform songs spanning our entire discography. You guys better be ready for us.”

This will mark EPICA’s long-awaited return to North America after the band’s tour with Machine Head late 2013 got cancelled. It will also be the group’s first North American run in support of their highly acclaimed latest album, The Quantum Enigma, which hit the charts all over Europe and beyond.

ELUVEITIE’s lead vocalist Chrigel Glanzmann further states: ”We're 8 months into the ‘Origins’ World Tour now and far from getting tired! We can't wait to finally return to the USA and Canada; especially because we'll return alongside the mighty EPICA! By Toutatis, this is gonna be fucking awesome!"

Revolver Magazine is the No. 1 hard-rock and heavy-metal destination in the world. In print for 10 years, the magazine takes readers into the studio, onto the stage, and behind the scenes, providing in-depth information, mind-blowing original photography, and hilarious insights they can’t find anywhere else. The home of The Hottest Chicks in Metal, Revolver also covers horror movies, mixed martial arts, tattoos, action sports, and more. In 2009 Revolver threw the first-ever U.S. hard-rock and metal awards show, the Revolver Golden Gods, which was broadcasted on MTV2 and featured appearances by Ozzy Osbourne, Maynard Keenan, Lemmy Kilmister, Megadeth, Kat Von D, Slipknot, Suicide Silence, the UFC’s BJ Penn, and many others. Revolver sponsors over 20 hard-rock tours each year, including the Rockstar Energy Mayhem Festival. Its website (http://www.revolvermag.com) features exclusive interviews, music and video, photo shoot outtakes, and contests.

EPICA and ELUVEITIE will both be offering VIP ticketing including meet & greets, exclusive merchandise, a Revolver Magazine subscription and the EPICA VIP bundle also includes a live 7-inch. VIP Tickets will be available through Soundrink.

Watch ELUVEITIE’s video for “The Call of The Mountains”: https://goo.gl/QtZ0eC