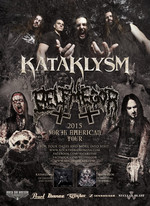 2015-07-14 - Canadian hyperblasters KATAKLYSM and diabolical death / black metal giants BELPHEGOR, will co-headline an uncompromising raid on North American shores this fall! "We've had a very busy year preparing for the world campaign for our new album, Of Ghosts and Gods, that is currently underway in Europe for the festival season,” commented vocalist Maurizio Iacono. “This fall, we will return to the US and Canada with our crazy brothers in BELPHEGOR, to destroy your souls and cities one by one. We hope to see you guys there joining in on the madness!"

Adds BELPHEGOR guitarist/vocalist and mastermind Helmuth Lehner:
"Ave! BELPHEGOR are looking forward to returning to US shores and celebrating our 9th North American raid to promote the latest offering, Conjuring the Dead. Revel in brutal musick and join the pit with us!“
Confirmed dates are as follows:


BELPHEGOR’s latest release, Conjuring the Dead, was recorded at Mana Studios in Florida under the direction of Erik Rutan (CANNIBAL CORPSE, GOATWHORE, HATE ETERNAL). The artwork was created by Greek artist, Seth Siro Anton who also created the cover of Pestapokalypse VI in 2006. After Helmuth’s near death experience, which caused the band to cancel several tours in 2011/2012 and family issues that caused a tour to be cancelled in 2014, BELPHEGOR are back to conquer; possessed, on fire and stronger than ever!