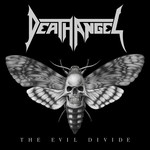 2016-05-27 - "In the age of fast-food music »The Evil Divide« is a masterpiece, where DEATH ANGEL music still catalyzes its violent effects in every nuance of its superb songs!"
ROCK HARD (I), Luca Bosio - 10/10

"»The Evil Divide« is a real thrash metal massacre and a highlight for the scene in 2016! Thrash till death!"
EMP (D), Jürgen Tschamler

Get the digital version here: http://nblast.de/DeathAngelDownloads

This week, the band have released a music video for the track 'Lost', here:


»The Evil Divide« was once again recorded at AudioHammer Studios in Sanford, Florida with producer Jason Suecof (TRIVIUM, DEICIDE), who previously worked on 2010's »Relentless Retribution« and 2013's »The Dream Calls For Blood«. Mastering duties were handled by Ted Jensen at Sterling Sound in New York City. Artwork was created by tattoo artist Bob Tyrrell.