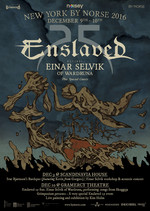 2016-06-22 - "Just like it was for many Norsemen before us, after the success of our sonic raid in London, the desire to continue further westwards came faster than you can say Christopher Columbus. Viking jokes aside, it feels fantastic to announce New York By Norse. We aim to present a cultural event that encompass both the ancient as well as the contemporary and on a more personal note I am very much looking forward to do my first ever performance in New York!"—Einar Selvik of Wardruna.

By Norse is very proud and happy to announce New York By Norse happening December 9th & 10th! By Norse, known as a "platform for art, music, literature, film, and culture," will host an installment of events throughout December 9 and 10 in New York City, presented together with Noisey. These happenings are designed to support Norwegian art, music, literature, film, and culture abroad. New York By Norse will also serve as a celebration of 25 years of Grammy award-winning metal band ENSLAVED and as a platform for showcasing the work of Einar Selvik of Wardruna.

FRIDAY, DECEMBER 9TH @ SCANDINAVIA HOUSE:
Bardspec (Enslaved's Ivar Bjørnson feat. Kevin Hufnagel of Gorguts)
The BARDSPEC is the Ambient project of ENSLAVED composer/guitarist Ivar Bjørnson. This showcase will feature the set-up of Bjørnson: his computer, some keys, a few strings, a pedal or two, a video canon and sometimes, a trapeze artist. Dark, surprisingly rhythmic and hypnotic-psychedelic, yet minimizing, cutting away, subtracting and meditating upon the simplest essence of things, Bardspec uses of the best of the basic elements and building blocks that make up the whole to create a sonic atmosphere. Here, he will be joined by none other than Gorguts guitarist Kevin Hufnagel.

Einar Selvik Workshop - "The Thoughts and Tools Behind Wardruna":
Einar speaks about his approach to Norse historical music and the extensive creative concept behind Wardruna´s ongoing Runaljod trilogy. Other topics will include his approach and study of the runes and other Norse esoteric arts, the oldest Nordic instruments, playfully acoustic Wardruna music, including the newest release of the trilogy, "Ragnarok" and a Q&A segment.

This showcase is limited to 150 tickets only. Tickets go on sale tomorrow, June 23rd at 10AM EST. and can be purchased here!

SATURDAY, DECEMBER 10TH @ GRAMERCY THEATRE:
Exhibition by Kim Holm including Grimposium panel (starting 5 PM):
Norwegian creative artist and motion designer Kim Holm will display his works and do live paintings of the artists while performing on stage. Grimposium founder Vivek Venkatesh and filmmaker David Hall will hold the Grimposium panel including a special ENSLAVED announcement. The two will dig deep into ENSLAVED's past and present while also surprising fans with a special secret event, one that has been predicted to be "time-bending and mind-warping."

Enslaved 25, "Then and Now" - Two sets, one night!
New York By Norse will conclude with ENSLAVED 25, in order to celebrate a quarter-century of one of Norway's most revered artists. The band will be playing two set, each highlighting the uniqueness of, but also the coherence in, the “Then” and the “Now” in ENSLAVED's history. This showcase will feature a performance by Einar Selvik, along with pieces of musical project Skuggsjá featuring both Selvik and Bjørnson. Kim Holm will be on site creating live paintings of the event to be sold after the show. With more details to come, those interested are encourage to descend upon Gramercy Theatre to celebrate ENSLAVED 25 in partnership with By Norse — celebrate in style!

This showcase will have limited tickets. Tickets will go on sale, Friday, June 24th @ 10:00 AM EST and can be purchased here.

“2016 is ENSLAVED's 25th anniversary as a band, and it is simply not acceptable leaving the US out of our celebrations", comments Ivar Bjørnson of ENSLAVED. "With a crazy schedule set for the year, we were turning every stone for an opening - and we found one! We are extremely proud to be able to present a double set in New York; to give the full width of old and new material, in conclusion of a fantastic year of celebration. When we started talking about By Norse and how we could bring the concept out into the world; "New York By Norse" was one of the first ideas to be verbalized. At the time, it seemed more like a dream scenario than anything else. Then came London By Norse in March earlier this year; our first materialization of the concept - and it was a massive success! Turns out all these crazy visions were possible to turn into real life after all... and here we are.“