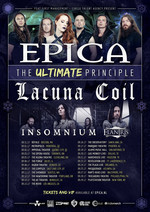 2017-04-24 - Dutch Symphonic Metal giants EPICA will return to North America this August and September for the North American leg of the ULTIMATE PRINCIPLE TOUR, the band’s biggest North American tour to date. The band will be joined on this tour by Italian Gothfathers Lacuna Coil, their friends in Finnish melodic death metal Insomnium and newcomers Elantris!

EPICA front woman Simone Simons and EPICA guitar player Isaac Delahaye comment:
You asked for more, you'll get more! After all the great reactions we got on our latest album The Holographic Principle and the amazing North American tour we've done end of last year, we're really stoked to come back to your side of the planet so soon again. Bigger venues, bigger production, we're ready to give you all we've got. Not to mention the absolutely killer bands we're bringing over with us! I'm genuinely looking forward to play for you and to see you all rocking out with us. See you all soon!

VIP tickets for this tour including a meet & greet, photo opportunity with the band, exclusive merchandise + more are on sale now through http://www.epica.vip

General admission tickets will go on sale this Friday at 10 am local time.